Episode 23.  July 3, 2016.  There have been many references to rescuing others in the church. This has primarily been driven by President Thomas S. Monson’s plea to reach out and rescue those who have lost their way. In fact, this has been such a theme in Pres Monson’s life that his biography by Heidi Swinton was titled, “To the Rescue”.  But while rescuing others has been the focus of the church for the past few years, today I want to talk about a different rescue.   I want to talk about rescuing ourselves.

Let me share with two dramatic examples of self-rescue.

The first involves a man named Al Hill from Iowa Hill, CA. Here is a brief description as reported by the Associated Press on Thursday, June 7, 2007.

“Alone in the woods with his left leg pinned beneath a fallen tree for 11 hours, a 66-year-old man used pocketknives to cut off his limb below the knee to free himself, a neighbor and authorities said.

Al Hill had been cutting trees last Friday when one fell on him. After freeing himself, he cried out for help, and a neighbor passing through this sparsely populated area heard him.

Eric Bookey (the neighbor) then hiked nearly two miles to get a cellular signal and placed an emergency call to the town’s all-volunteer fire department about 7:30 p.m., Fire Chief Luana Dowling told The Associated Press

Hill was eventually airlifted by helicopter to a hospital where he underwent amputation surgery, Dowling said. “He’s a pretty remarkable man.”

The second story is more well-known, primarily because a movie was made of the event.   It is the story of Aron Ralston and the movie of his experience was titled 127 Hours. In 2003, Aron Ralston was hiking in a remote slot canyon in Blue John Canyon in southeastern Utah. As he was climbing down the narrow passage, he slipped and fell, knocking loose an 800-pound boulder that pinned his right arm against the narrow

canyon’s wall. After five lonely days of struggle to free himself, Ralston finally realized he could use torque to break his arm bones and then cut through the flesh with the dull knife blade on his multi-tool. Once through the flesh, muscles and tendons, he found only the nerves remaining to be cut in order to be free. Summoning all of the courage he could muster he used the dull knife to first stretch and then cut through the nerves. He then wrapped the arm to stop the bleeding, climbed 65 feet out of the canyon and hiked 7 miles before being rescued.

While not quite so physically dramatic as Al’s and Aron’s experiences, there are some profound examples in the scriptures as well. All which required a choice to be made. The rescue of Saul and Alma the Younger both started with a surprise visit from a heavenly messenger. Both then had to make a decision about their future course of action. Both ended up dedicating the rest of their lives to preaching the gospel of Jesus Christ and bringing others into the Church of God.

Another example of scriptural self-rescues are those of King Lamoni and his father. Both of them had to decide to give away their sins and not only change themselves, but also be an example for the people they governed. The results were amazing!

Joseph Smith is also an example of this principle. He was relentless in his pursuit of truth. The spirit kept prompting him to seek for truth and to come to know for himself. The result of his rescue was, well, not only profound to him, but it has changed the world!

One last example worth mentioning is that of the ten lepers. From Luke 17 we read:  “And it came to pass, as he went to Jerusalem that he passed through the midst of Samaria 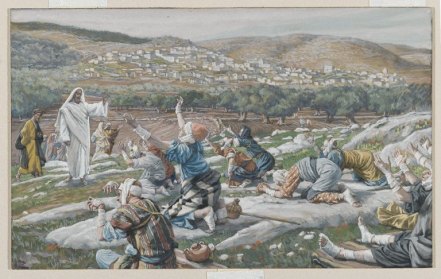 and Galilee. And as he entered into a certain village, there met him ten men that were lepers, which stood afar off: And they lifted up their voices, and said, Jesus, Master, have mercy on us. And when he saw them, he said unto them, Go shew yourselves unto the priests. And it came to pass, that, as they went, they were cleansed.”

In this example these lepers sought out Jesus and asked him to have mercy on them, as they sought to be healed. As they obeyed they were blessed and healed.

You see, at the end of the day, I think there is only one question we have to ask ourselves. It is simply this: “What do we want?”. This is a question that we can learn about in the temple and it is essentially the same question that Jesus asked John when he said: “John, my beloved, what desires thou? The same question was asked of Nephi by the Spirit in chapter 11 of First Nephi. “And the Spirit said unto me: Behold, what desirest thou?

While a freshman at BYU in 1975, my parents let me drive my car down from Idaho so I would have transportation. (It was a 1966 Plymouth Belvedere so it wasn’t that exciting). I vividly remembering one Saturday morning thinking that I could go anywhere I wanted without telling anyone. I was free! And then I realized, I didn’t really want to go anywhere. I had responsibilities and commitments that I wanted to keep and fulfil. In that moment, I made a decision about the boundaries I would set for myself the rest of my life.

So this is ultimately the question we must ask ourselves. What do we want? What do we desire? Elder Maxwell said this about desire:

“Whether in their conception or expression, our desires profoundly affect the use of our moral agency. Desires thus become real determinants, even when, with pitiful naiveté, we do not really want the consequences of our desires.”

So what if we are struggling to have enough desire to rescue ourselves from wherever we are in life to wherever it is we want to be? Elder Oaks in his April 2011 conference address titled “Desire” gives us two very simple suggestions:

1) Deliberately decide what we want.  Perhaps one of the first things we can do is to decide to accept the invitation in the scriptures to “sanctify ourselves”.  To do this, we have to decide to decide. President Harold B. Lee once explained that you can replace the words “sanctify yourself” with the phrase “keep my commandments.”    So the decision that we are making is that we want to start to keep the commandments of God better than we have in the past.

2) Ask Heavenly Father to help us with our feelings.   Elder Oaks quotes Moroni 7:48 from the Book of Mormon that teaches us that we should “pray unto the Father with all the energy of heart, that [we] may be filled with this love, which he hath bestowed upon all who are true followers of his Son, Jesus Christ”. How wonderful to know that Heavenly Father can actually help us change the way we feel!

I want to add a third.

3) Start reading the Book of Mormon every single day.

In Lehi’s vision of the tree of life we learn there were three groups that made their way to the tree of life. The first group did not use the iron rod and were lost in the mist of darkness before arriving at the tree. The second group recorded in 1 Ne 8:24 came forth and caught hold of the end of the rod of iron; and they did press forward through the mists of darkness clinging to the rod of iron. And after they did partake of the fruit of the tree they did cast their eyes about as if they were ashamed and fell away into forbidden paths.

In vs 30, Lehi saw a third group pressing forward; and they came and caught hold of the 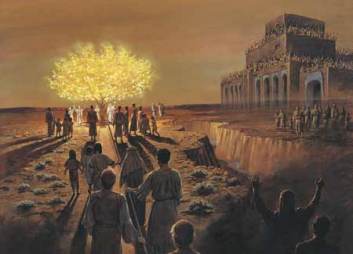 end of the rod of iron; and they did press their way forward, continually holding fast to the rod of iron, until they came forth and fell down and partook of the fruit of the tree. This group did not fall away.   Note the difference in these two groups.

Elder Bednar suggests that the second group may only have periodically read or studied or searched the scriptures. Occasional “bursts” of study or irregularly dipping rather than consistent immersion in the word of God. With the third group he suggests it was perhaps the spiritual strength and nourishment provided by continually feasting upon the word of Christ that enabled the group not to heed the scorning and mocking of the those in the great and spacious building.

So why is developing righteous desire so important? Elder Maxwell says it best.

“Therefore, what we insistently desire, over time, is what we will eventually become and what we will receive in eternity.”

So let me summarise:   Rescuing ourselves is about having desire to change. We can create this desire by making a decision to keep the commandments and by praying for Heavenly Father to change our hearts. A good way to help us on this journey to hold fast to the word of God by reading and studying the Book of Mormon every single day.

Rescue denotes moving away from danger and into safety. I know there is safety in the kingdom of God as a member of his church with full access to all of the priesthood ordinances, blessings and covenants.

I want to close today by sharing a scripture and an inspiring quote from the movie Shenandoah.

First, the scripture which is found in 3 Nephi 9:14. This is the blessing for those who chose to rescue themselves.

Yea, verily I say unto you, if ye will come unto me ye shall have eternal life. Behold, mine arm of mercy is extended towards you, and whosoever will come, him will I receive; and blessed are those who come unto me.

And second, the quote from the movie.