Episode 24.  July 10, 2016.  Today I want to talk about the atonement of Jesus Christ and the power of just simply asking.

Not long after I was called as a Bishop in 1997, a member of my ward came in and confessed to a serious sin. It was my first experience with a confession of this sort, and the impact the sin had been having on this person’s life was of significant concern to me. The person was remorseful and really wanted to repent. There was godly sorrow and a commitment to do whatever she would be asked to do to be clean again before the Lord.

The words flowed easily that day as we counseled together.   I knew the atonement could heal her, but even I was surprised how complete the recovery was. This individual did everything that we agreed that day. She began to study her scriptures and to pray again. She had always been a regular church attender, but now she came with purpose. Though she was unable to partake of the sacrament for some period of time, she effectively used that time to draw nearer to Christ and to plead for forgiveness.

The individual that came out of the other end of this repentance process was born again. She was vibrant, filled with life and with a testimony and love for her Savior that she had never felt before. The change was obvious. Within a year she was serving in a presidency and a model example of a Latter-Day Saint.

Now I have to admit, I was a bit surprised. I mean, I knew the atonement was real and that we could be forgiven of our sins, but I didn’t appreciate just how complete a change the atonement could make in a person’s life who was willing to ask for forgiveness and then commit to obeying the commandments. I stood all amazed at the love Jesus offered her.

This was a great blessing for me as I began my service as a Bishop. It strengthened my testimony that I did not even think needed strengthening. It changed everything about the counsel I would give other members during the time that I served. It caused me to search the scriptures more diligently to understand this great gift more completely.

As I began to study the atonement through the scriptures, I became fixated on the experience of Alma the Younger. Here was a man who had committed some pretty 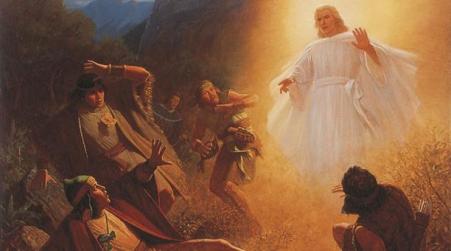 grievous sins and yet as he came out of his repentance process he was not only spiritually born again, but he was a completely different person. He eventually became a great prophet and brought countless numbers of people back into the church of God as recorded in the Book of Mormon. I wanted to understand this better, so I prayerfully read, reread and pondered his experience as recorded in Alma chapter 36.

You all know this story about how Alma and the sons of Mosiah were going about in an effort to destroy the church of God, when an angel appeared and told them: “If thou wilt of thyself be destroyed, seek no more to destroy the church of God”.   This was quite a wake up call for Alma who had been the ringleader of this little destructive group. In fact, he was struck with such great fear and amazement thinking that now he would be destroyed, that he immediately fell to the earth and could not move or speak.

As I pondered on this scripture and asked myself what just happened, it became clear to me. Alma simply had to have enough faith in order to ask for forgiveness. In order to invoke the power of the atonement in his life, he only needed to ask!  It is also worth mentioning that Alma was essentially paralyzed and could not even speak, so all he could do was just think the words! And it still worked!

As I continued to search the scriptures, I came across the story of the brazen serpent. It is referenced four times in the Book of Mormon. After reading all four of these references, I was curious about the original account in the Old Testament found in Numbers Chapter 21 vs. 6-9. Here are those four short verses: “And the Lord sent fiery serpents among the people, and they bit the people; and much people of Israel died.  Therefore the people 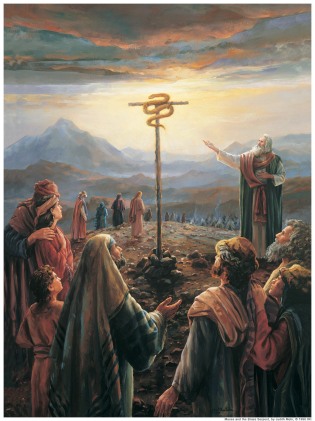 came to Moses, and said, We have sinned, for we have spoken against the Lord, and against thee; pray unto the Lord, that he take away the serpents from us. And Moses prayed for the people. And the Lord said unto Moses, Make thee a fiery serpent, and set it upon a pole: and it shall come to pass, that every one that is bitten, when he looketh upon it, shall live. And Moses made a serpent of brass, and put it upon a pole, and it came to pass, that if a serpent had bitten any man, when he beheld the serpent of brass, he lived.“

As you can see, there is nothing here about those who refused to look. However, if we read the scripture in 1 Nephi 17:41 we read: “And he did straiten them in the wilderness with his rod; for they hardened their hearts, even as ye have; and the Lord straitened them because of their iniquity. He sent fiery flying serpents among them; and after they were bitten he prepared a way that they might be healed; and the labor which they had to perform was to look; and because of the simpleness of the way, or the easiness of it, there were many who perished.”

This reinforced what I had just learned from the story of Alma the Younger. Just as Alma the Younger only had to ask for forgiveness, all the children of Israel had to do was look on the brazen serpent.   This would have been so easy, and yet despite the easiness of the way, the people’s hearts were so hardened that many refused to look.

I was teaching priests quorum one day after learning all of this information about the atonement. I wanted the priests in the ward to come to understand and appreciate the atonement in the deep manner that I felt I was beginning to understand it. As I told this story about Moses and the brazen serpent and how hard-hearted the people were that they wouldn’t even look, one of the young men in the quorum whispered to his twin brother just loud enough so the rest of us could hear it “I think I would have just taken a quick peek to see if it would have healed me!”   We all had a good laugh and then I bore my testimony to them that these people were so filled with pride, and had such hard hearts, that they refused to even think that looking might be the answer. I said it is no different for us today. Just as it would have been easy for those with hard hearts to sneak a peek to see if it would make a difference, there are many in the church and out of the church, that refuse to get on their knees and ask Heavenly Father for forgiveness though the grace of the atonement of Jesus Christ, because they don’t believe it will work for them!

The invitation to believe in the Son of God and his ability to heal us is recorded in one of the other scriptures from the Book of Mormon that reference this incident. It is found in Alma 33:21-22 – “O my brethren, if ye could be healed by merely casting about your eyes that ye might be healed, would ye not behold quickly, or would ye rather harden your hearts in unbelief, and be slothful, that ye would not cast about your eyes, that ye might perish? If so, wo shall come upon you; but if not so, then cast about your eyes and begin to believe in the Son of God, that he will come to redeem his people, and that he shall suffer and die to atone for their sins; and that he shall rise again from the dead, which shall bring to pass the resurrection, that all men shall stand before him, to be judged at the last and judgment day, according to their works.”

Isn’t that beautifully written? Surely we all need to cast our eyes and begin to believe in the Son of God in a much deeper and profound manner.

I want to mention one last event that again reinforces this concept, but on an even grander scale. It is found in the sermon of King Benjamin to his people in the first three verses of Mosiah chapter 4.

“ And now, it came to pass that when king Benjamin had made an end of speaking the 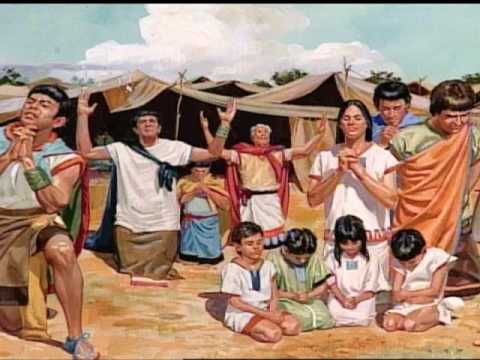 words which had been delivered unto him by the angel of the Lord, that he cast his eyes round about on the multitude, and behold they had fallen to the earth, for the fear of the Lord had come upon them. And they had viewed themselves in their own carnal state, even less than the dust of the earth. And they all cried aloud with one voice, saying: O have mercy, and apply the atoning blood of Christ that we may receive forgiveness of our sins, and our hearts may be purified; for we believe in Jesus Christ, the Son of God, who created heaven and earth, and all things; who shall come down among the children of men. And it came to pass that after they had spoken these words the Spirit of the Lord came upon them, and they were filled with joy, having received a remission of their sins, and having peace of conscience, because of the exceeding faith which they had in Jesus Christ who should come, according to the words which king Benjamin had spoken unto them.”

Here is an amazing example where the power of just asking, with a willingness to then follow through with obedience to the commandments, resulted in an entire group of people simultaneously receiving forgiveness and being born again.   This event was so powerful in the lives of those who were there that it appears from Mosiah 26, that the people kept their covenants and were righteous up until the time that the children who were so small that they could not understand King Benjamin’s words, began to rebel. It appears that everyone there that day, stayed faithful!

I know it works, I know that the strengthening and enabling power of the atonement is real, tangible and effective. I hope we can all have sufficient faith to access that power by simply having enough faith to ask and enough courage to follow thru and change.

One thought on “Ask”