LaDawn wrote the post this week, so I thought I would add a second one with our weekly highlights.

On Monday evening LaDawn still wasn’t 100% so I attended the Simbeck Branch FHE with the Young Single Adults.  Only three showed up last week:  James, Mohammed and Elizabeth. We had a good question and answer session and then enjoyed some cupcakes that we had made earlier in the day.  There was a man with one leg on crutches along with his family that lives next door to the church. They are not members of the branch, but were very kind, so I gave them a cupcake on the way in and one on the way out. He said he would come to the branch on Sunday but I don’t think he came.  We had a meeting with the branch presidency at 12:15 today and when we got there about 12:10 we did not see them.  On the way home I stopped by the Nyandeyama Branch which is right next door to our apartment and greeted the young single adults that had gathered there.  I gave them the rest of the cupcakes, and by some small miracle had exactly the number of cupcakes left as there were people.

On Tuesday, we put together a music lesson for some of the members from the Kenema and Kpayama branches.  While we are no musical genius’s, we were able to teach them

about key signatures, timing, notes, sharps and flats and conducting.  Everyone there was male, we had no sisters present, but they all seemed to appreciate it and asked us to come back again this week and teach them some more (we are not sure we know anything else so we are trying to figure out how to take them to the next level!). Tuesday evening, we had District Choir practice at the District Center.  LaDawn has become the District Choir pianist and is doing a great job. The Choir is really starting to sound pretty good.  Our only worry is that we might peak too early as District Conference is still over 6 weeks away! 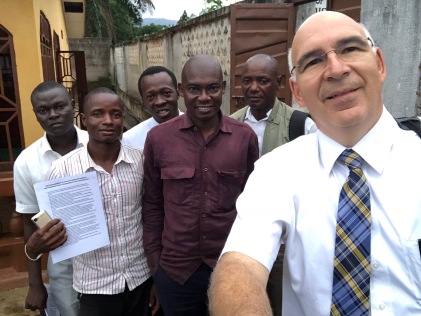 On Wednesday I spent much of the day preparing a presentation for the training of the Branch Presidencies.  Based on an agenda that President Cobinah and I had discussed and agreed, I pulled together a PowerPoint presentation that we were able to use.  At 4:30 pm President Cobinah and I went over to the Burma Branch and there trained a wonderful branch presidency.  I led the discussion on being a United Presidency, what a good agenda for a branch presidency meeting looks like, their role as Presidency of the Aaronic Priesthood and Priesthood Leaders with responsibility for the Young Woman.  President Cobinah then led a great discussion on using self-reliance as a tool for ministering.  It was really well done and I believe we were all edified.  Unfortunately, a week earlier the Burma Branch building was broken into and nearly everything of value was stolen.  So, the generator was missing which meant no electricity at the building. Fortunately before we left on our mission I found a small LED Viewsonic portable projector online that runs on batteries and connects directly to my MacBook Pro.. It was a lifesaver!

On Thursday, we had the privilege of accompanying the Kenema Branch President and his wife to receive their patriarchal blessings.  Since there is no patriarch here in Kenema (patriarchs are only attached to stakes, not districts), we went with them to Bo.  It was a red-letter day for them and we were thrilled to be a small part of it. Congratulations to the Komba’s!  While in Bo we were able to pick up some much-needed supplies at the stationery store there as well as the grocery store.  Sister Moomey even trimmed LaDawn’s hair for which she was grateful.  After returning home we drove over to the Burma

Branch to participate in their choir. By the time we finished it was getting pretty dark both inside and out (still no electricity).

On Friday morning, we visited briefly with the full zone of full-time missionaries who were meeting next door at the branch building (Nyandeyama) for a zone meeting.  We received four brand new missionaries (1 sister and 3 elders) and 3 experienced missionaries replacing 3 who were transferred. I couldn’t help but take a picture of this amazing group of young men and young women!

From there I went over to the Simbeck Branch, where President Cobinah and I repeated the training from the Wednesday evening for the branch presidency there.  All of them are relatively new in their callings and really appreciated the new insights and

understanding that was gained.  Today LaDawn and I went back to that presidency and visited with them for about 40 minutes about how they felt we might be able to help them.  It was humbling to be among such faithful and devoted leaders.

Friday night we again attended District Choir and I must say that we sounded better than we ever had. Musical talent and singing here is not a deep rooted tradition the way it is in the Philippines, but the Sierra Leonean Saints love to sing!

On Saturday we did one more branch training, this time for the presidency of the I.D.A. Branch. President Cobinah’s second counselor, Paul Aruna joined us and we had a wonderful experience as we taught them and they taught us.  Later that day we went back to the Burma Branch to sing with their choir as they prepare for Branch Conference one week from today.

Today we attended the Kpayama Branch conference.  There were several speakers and all did a nice job.  Sacrifice, service, love of fellowmen were themes of the talks. President Cobinah spoke at the end and reinforced to the saints that growth is not about numbers, but spiritual depth, strength of testimony, level of commitment, increasing covenant making and ministering to one another with the pure love of Christ. It was a marvelous talk!

After sacrament meeting I attended the Gospel Principles class.  This is where those who are investigating the church come to learn more. The class was absolutely packed full.. There were probably about 40 people in the class with about half of them being members and the other half people that are being taught or want to be taught the gospel of Jesus Christ.  I sat next to a young man named Mattia Moseray.  I knew this young man because he came to our music class on Tuesday.  What I didn’t know until this morning is that he is

not a member of the church. He had only been coming to the branch for a week, but he had such excellent questions and he is a very quick learner.  Needless to say, I was quite impressed with him.  When I meet young people like this I am so happy because they will be the future for this country and the future of this church.

Once again, after meeting with so many saints during the week, I continue to be impressed how it is that the church has gained such strength.  The knowledge of the members is impressive, their willingness to learn humbling and their desire to serve exemplary.  I want to be more like them!

9 thoughts on “Weekly Highlights (the 4s’s of Kenema)”