I thought it might be interesting to tell you about the 4 S’s . Sights, Sounds, Smells and Smiles.

Sights: It is interesting to me that most keep their own personal space pretty clean. Each

morning as we go by they are out sweeping the dirt in front of their homes about 3 feet out, but that is where it stops. If there is a ditch they push the trash into the ditch, if not, they scoop it up and carry it somewhere close by. It is not uncommon to see the ditches and ditch banks around a home dirty, but the porch and front area very tidy.

Another common sight are all the loose chickens, goats, sheep and dogs that roam freely

throughout Kenema. We are always curious who owns them and takes responsibility to feed them, but they seem to be grazers. We have no idea to whom they belong, nor do we understand who knows which animal is theirs if they should decide to have it for dinner. 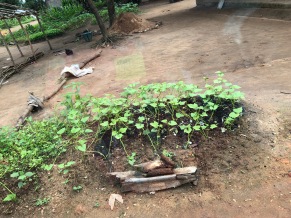 This little garden is basically in the middle of the road.

Another common sight is to see produce growing in almost any area where there is dirt to grow.  Sometimes it is just a strip of dirt along a road. Most of the times they are being over-run by weeds, but they still manage to get some harvest from them. Have you ever heard of potato leaf? Apparently they cut the leaves up and fry them then add them to rice or stew. We see women carrying large bowls full of them along with cassava leaves on their heads to market. They try to use every part of the plant that they can. 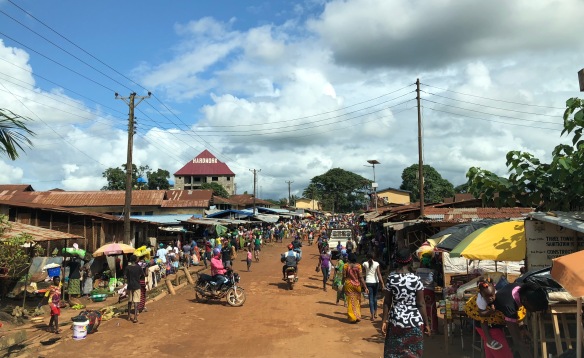 Every area has their own market. The one near us seems to be the biggest and is busy everyday, but on Saturdays it is crazy. You can buy fresh produce, eggs, plastic goods, fabric, ropes, boots, clothes, baby items, cooked food, and the list goes on and on. There is where the locals shop unless they can afford to go to the small grocery store that is available and carries some western (and far eastern) food and housewares.

Tom mentioned before that motorcycles (okadas) are very common here along

with a KeKe. (a 3-wheel motorized, covered little vehicle that is suppose to be able to carry 4 people, but in realty it is really only comfortable for 2). Okadas can be hazardous to your health if you are not paying attention to them. We have many just pull out in front of us. Most of the time they don’t even look where they are going, but just turn in front of you at the last minute. Fortunately with all the bumps we are not usually driving very fast and Tom can deal with it.

Before I forget, one of my least favorite

sights is the men relieving themselves anywhere they so desire. When we first came into Kenema there was a man with some obvious mental deficiencies using the middle of the road as his own port-a-let, without the walls. There are no public restrooms that I am aware of so where do the women go?  We saw this same male behaviour in the Philippines too, but not quite so common as it is here.

Sounds: Where we live we are just on the edge of a community. It is hard to have any quiet time. There are children playing, mother’s yelling, sheep baaing and so on. Not to mention the continuous horn honking of the okadas.

Since we are in rainy season right now there is the sound of rain, which I don’t mind but does make it difficult to hang clothes out on the line to dry.

Another sound that sometimes can drive us crazy are the birds. Our windows on our house are reflective and once it starts to get light outside small birds start pecking at the windows I guess thinking there is another bird there. Some are slower than others in figuring out that there is no one there.

The most annoying noise for us is this small Christian church close by that likes to play music all night long on the weekends over a loud speaker.   It starts about 10:00 p.m. and goes until about 6:00 a.m.   When we first moved here it was really loud but they have at least toned it down a little bit.   Sometimes they have someone talking over the loud speaker repeating the same thing over and over. It makes it difficult for a good night’s sleep.

There is also the calling to prayer for the Muslims. We have a synagogue close also. Fortunately, even though it is often it is short lived and not even close to as loud as the other little church.

Smells: How can I describe the smells so you can imagine them?   There are smells from the trash everywhere, there are smells of cook fires as well as the actual food cooking that we can smell when we walk by homes or even through the markets (most of those smell wonderful, but we have never tried them.)  I have already had a bout with a stomach bug so not interested in it happening again.   There is the urine smell that you can smell in some areas as I mentioned earlier.  We are living in a country where there is no money available for luxuries such as deodorant. People are hard working and seems they are always washing clothes. It is the exception to see people in anything but clean clothes. But when the sun comes out and perspiration starts running, it does create an odor that we are not so used to.  Enough said.

Smiles: My favorite part. The longer we are here the more smiles we get. The children love to smile and touch our hands. The teenagers and young adults are a bit friendlier than the older adults, but the old people like to smile too. Some are shocked when you say good morning to them, but most do respond. Some look forward to seeing us on our walks and wave to us and are starting to say good morning to us first. It is the best part of my day. The pictures say it all. 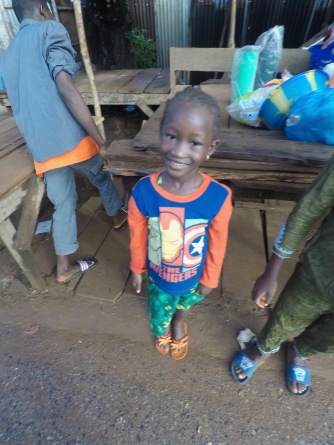 There is so much that we are learning here. Most of the clothing here is used and a lot of it comes from the US. We have seen BYU shirts, BYU Idaho shirts, an Idaho Falls shirt, California shirts and especially Chevrolet shirts, and so on. We have seen people wearing pajamas during the day probably not knowing they were pajamas. One woman I saw the other day was in some pink satin pajamas and was out digging a ditch. We sometimes see men wearing women’s clothing and color doesn’t matter either. They are just so grateful to have clothes they can afford to buy. They have no idea what is made for a women and what is made for a man. They just wear what works for them. With limited internet here and the cost of data being high, they are not influenced by the rest of the world as to  what to wear.  It is kind of refreshing in that sense.

We feel so blessed to be here and appreciate more each day our blessings.  We felt gratitude for America while we were living in the Philippines, but this experience is much more life changing. The Lord loves these people here in Kenema and so desires them to turn to Him and come to know Him more. The full-time missionaries serving here are doing a great job integrating into the lives of those around them and bringing them the gospel of Jesus Christ.  We are honoured to be part of that same missionary force.