Episode 43.  November 20, 2016.  Today I want to talk about what happens when we pray for guidance and then courageously walk into the darkness at the edge of the light. So with that, let’s get started….

I want to start today by sharing a story from then Elder Boyd K. Packer.

“Some years ago, I learned a lesson that I shall never forget.  I had been called as an Assistant to the Twelve (Quorum of the Twelve Apostles), and we were to move to Salt Lake 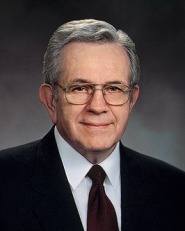 City and find an adequate and permanent home.  President Henry D. Moyle, of the First Presidency of the Church, assigned someone to help us.

A home was located that was ideally suited for our needs.  Elder Harold B. Lee came and looked it over very carefully and then counseled, “By all means, you are to proceed.”

But there was no way we could proceed.  I had just completed the course work on a doctor’s degree and was writing the dissertation.  With the support of my wife and our eight children, all of the resources we could gather over the years had been spent on an education.

By borrowing on our insurance, gathering every resource, we could barely get into the house, without sufficient left to even make the first house payment.

Brother Lee insisted.  “Go ahead, I know it is right.”

I was in deep turmoil because I had been counseled to do something I had never done before–to sign a contract without the resources to meet the payments.

When Brother Lee sensed my feelings, he sent me to President David O. McKay, who listened very carefully as I explained the circumstances.

He said, “You do this.  It is the right thing.”  But he extended no resources to make the doing of it possible.

When I reported to Brother Lee, he said, “That confirms what I have told you.”

I was still not at peace…..and then came the lesson.

Elder Lee said, “Boyd, do you know what is wrong with you?  You always want to see the end from the beginning.”

I replied quietly that I always wanted to see at least a few steps ahead.  He answered by quoting from the sixth verse of the twelfth chapter of Ether.  “Wherefore, dispute not because ye see not, for ye receive no witness until after the trial of your faith.”

I want to share with you another story that starts around 1885 when a man named Joseph left his home near Prague, in what was then Bohemia and made the 750 km trip to the small village of Vysne Revistia in Slovakia, just 25 km from the Ukrainian Border. There Joseph met and later married Julia. Life was grim in Slovakia. Most were peasant serfs and had little control over their own lives and little hope for something better. Disease was rampant. Few households had not experienced the death of a child. So it was in 1891 that Joseph and Julia decided to take a step forward at the edge of the light into the darkness. Joseph saved enough for passage to America and upon landing in Philadelphia, made his way to the coalmines in Harrisburg, Pennsylvania where a year later he was able to earn enough to send for his wife Julia and their son, Frank. Five years and two additional children later, Joseph and Julia made their way to Arkansas in search of a milder climate. Joseph then worked in the coalmines in Spadra, Arkansas for three years as their family welcomed two more children. In an effort to save Joseph from the dreaded black lung disease that was already impacting his health, they managed to secure a 160-acre homestead on rocky River Mountain near Dardanelle around 1900, where 6 more children were born.   Twenty years removed from that difficult decision to leave their homeland, their families and their friends, Joseph and Julia had a full, though challenging life with 11 children and 160 acre farm they called their own. I tell this story because Joseph was my great-grandfather and Frank, their first born was my grandfather. How grateful I am for these courageous, hard working, and faith filled progenitors who willingly took a step forward into the dark so that I might have the amazing life that has been mine.

Okay, now for a third story. This one comes from the Book of Mormon where this pattern of stepping forward with faith without knowing exactly where that first step might lead repeats itself often. The most popular occurrence happens in 1 Nephi where Nephi set out on the third and final try to get the plates of Brass from Laban. I think we can all quote the scripture in chapter 4 vs. 6 . “And I was led by the Spirit, not knowing beforehand the things which I should do.”

But that is not the story I want to share with you today.  This one is in Alma chapter 58 and is a wonderful and instructive example of this same principle. The story is told by Helaman 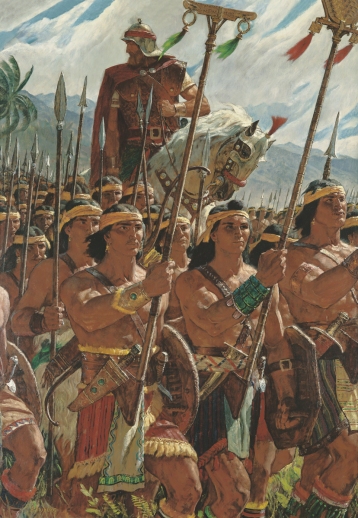 in an epistle that he wrote to Captain Moroni explaining the status of the war in that part of the land. Helaman and his stripling warriors, along with Antipus and Gid and their armies had just been successful in a difficult, but significant defeat of the Lamanites. They had also successfully taken back the city of Antiparah without bloodshed and then the city of Cumeni fell into their hands after they cutoff the supplies of the Lamanites going into the city. Their next object was to regain the well guarded city of Manti where a very large Lamanite Army was stationed. As these leaders counseled together, they decided to wait for reinforcements from the governor of the Land. But the help never came. Helaman says they waited for “the space of many months, even until they were about to perish for the want of food” (Alma 58:7).

Finally two thousand men arrived with food, but they knew it would not be enough to sustain them or the reinforcements big enough to save them from the increasing encroachments by the Lamanite army. This caused them all to pour out their souls to God pleading for strength and deliverance out of the hands of their enemies.  They also pled for strength to retain their cities, their lands and their possessions. (see Alma 58:10) After these heartfelt, and probably a bit desperate, prayers, Helaman recounts that the Lord did visit them with assurances that He would deliver them by speaking peace to their souls and granting unto them great faith which caused them to hope for their deliverance.

With this new found faith and hope, they took courage ,“fixed with a determination” to conquer the Lamanites and maintain their lands and their families for the cause of Liberty. And with nothing more than faith, they took the first step, leaving the safety of the city of Cumeni and pitching their tents on the wilderness side of the city of Manti. It didn’t take long for the Lamanites to discover them, see that they were not a large army, and begin to make preparations of war to come against them.

Helaman and his men had to act and they had to act now. The clock was ticking and decisions had to be made. And this is where the miracle occurred. Verse 16: “And when we saw that they were making preparations to come out against us, behold, I caused that Gid, with a small number of men, should secrete himself in the wilderness, and also that Teomner and a small number of men should secrete themselves also in the wilderness.”

It appears from the record that there was no pre-planned strategy here. Helaman and those with him, filled with faith and a resolution to go out and defeat the Lamanites at all costs, in the moment are inspired with an idea that exceeds their greatest expectation. Helaman and his men retreated into the wilderness and the huge army of Lamanites “did follow after them with great speed”. Once they passed by the rest of the army who had hid themselves in the wilderness, Gid and Teomner rose up and cut off the Lamanite spies so they could not return to the city. They then went to the city of Manti, fell upon the guards and took possession of the city.

Let’s go back to Helaman and his stripling warriors. They kept retreating further and further into the wilderness and when the Lamanites saw they were headed towards Zarahemla, they became afraid and stopped following them. The chief captains of the Lamanites taking no thought for Helaman and his army, pitched their tents and rested while Helaman caused that his men should not sleep, but that they should march forward by another way towards the land of Manti and his army circled around and returned speedily to Manti. Verse 29 tells us that when the Lamanites did arrive back near the city, they were “astonished exceedingly and struck with great fear, insomuch that they did flee into the wilderness.” And thus Helaman and those with him did take possession of the city without the shedding of blood. What an amazing story! And all of this happened because they prayed, received assurance from God that everything would be okay, and then stepped into the dark at the edge of the light, and as they did so, the light moved with them.

Isn’t this what life is all about? We generally never know the outcome of stepping into the dark at the edge of the light, but when we pray fervently for help, having faith that we will receive it, and then move forward, the light will always move with us.

In conclusion, I want to share a story from President Monson that he told In the April 2002 General Conference.

“Many years ago, on an assignment to Tahiti, I was talking to our mission president, President Raymond Baudin, about the Tahitian people. They are known as some of the greatest seafaring people in all the world. Brother Baudin, who speaks French and Tahitian but little English, was trying to describe to me the secret of the success of the Tahitian sea captains. He said, “They are amazing. The weather may be terrible, the vessels may be leaky, there may be no navigational aids except their inner feelings and the stars in the heavens, but they pray and they go.” He repeated that phrase three times. There is a lesson in that statement. We need to pray, and then we need to act. Both are important. The promise from the book of Proverbs gives us courage:   ‘Trust in the Lord with all thine heart; and lean not unto thine own understanding. In all thy ways acknowledge him, and he shall direct thy paths.’”

Life is filled with uncertainty and yet we cannot allow ourselves to stand still. We must press forward with steadfast faith in Christ, with hope’s bright flame alight in heart and mind. (see Hymn 81).

One thought on “Step Forward with Faith”