Episode 50.  January 8, 2017.  Today I want to talk about the Foundation of Genuine Happiness.

Last night LaDawn and I went out to dinner at 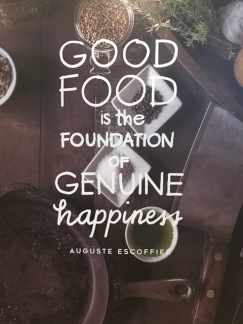 one of our favorite restaurants here in the Philippines. The name of the restaurant is The Grind Bistro. Normally we eat at the one between 4th and 5th Avenue here in BGC, but last night we tried their new location over in SM Aura Mall. (As an aside, I think we prefer the original location.) In the restaurant, well, in the mall they call it a café, there hangs a sign that says: “Good Food is the Foundation of Genuine Happiness“. The quote is attributed to Auguste Escoffier. I did a bit of research on this guy and here is what I found out.

Auguste Escoffier was born on October 28, 1846 near Nice, France. He was known as the “king of chefs and the chef of kings”. He earned a worldwide reputation 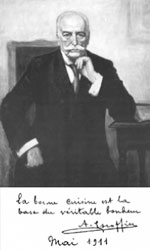 while at the Savoy Hotel and later at the Carton Hotel, both in London. He left the Savoy Hotel when he and his partners were charged with mismanagement and embezzlement. He signed a confession and originally agreed to pay 8000 GBP, but ended up settling for 500 GBP. He started his career at age 13, when, despite being a gifted artist his father took him out of school and sent him to work in his uncle’s restaurant. He showed quite a talent for cooking and kitchen management that at the age of 19 he was hired by a fashionable hotel as an apprentice roast cook. Months later he was inducted into active military service where he served as a cook in various assignments for 7 years.   After leaving the Army, he opened his own restaurant called The Golden Pheasant in Cannes until he moved to London to work in the Savoy. Two years later, in 1880, at the age of 34 he married Delphine Daphis. Auguste and Delphine had two sons, the younger one was killed in active service during World War I. Auguste died just a few days after his wife on Feb 12, 1935 at the age of 88.

So why did I tell you that story? Well, I guess because it is no wonder that he felt that food was the foundation of genuine happiness, it seems to have been all that he knew from the time he was 13 years old. While being honored by many as one of the greatest French chefs of all time, truly he lived a very narrow life if he believed that food would bring ultimate happiness.

Now I want to tell you a different story. This is a story told by my mission President F. Enzio Busche. I am sure I have some of the details wrong, as time tends to weave cobwebs of forgetfulness. But the lesson was etched on my soul by the spirit of the Lord when he first told this story to me in 1978.

President Busche was a marathon runner. He really enjoyed running, but it was not always

the case. He told us the story of the first marathon that he ran. He said after about 15 miles he wanted to quit and give up. His legs ached and he was completely spent. It was right about that time that he came around a corner and found a young boy on the side of the road with his bicycle chain broken. The boy was in tears. President Busche went over to the boy and asked him what had happened. Apparently he had been following his dad who was running the race and when his chain broke, his dad hadn’t realized it and went on ahead. The boy was left stuck with no way to get to the finish line except walk. At that moment, President Busche’s heart was filled with compassion. He told the boy to get on his bike and he would push him the rest of the way. President Busche related that where he was completely exhausted before, he was now filled with new energy and that he never once felt weary the remaining 10 miles. As he spoke to and focused on the young boy, he completely forgot about himself. He ran the rest of the way pushing this boy on his bike to the finish line.

I have always loved the lesson of this story. When we are looking inward, we can only see our own situation, our own pain, our own agony, our own disappointments and everything about life that is unfair. But when we focus outward on someone else’s troubles, somehow our own situation fades into the background and is just not so important anymore. This is the great blessing of serving others. Every time I think of this story, I think of this scripture found in Luke 9:24. “For whosever will save his life shall lose it: but whosever will lose his life for my sake, the same shall save it.”

Okay, back to the foundation of genuine happiness. In the book of Mormon, chapter 10 we are introduced to Zeezrom. This was a lawyer who was “foremost to accuse Amulek and Alma, he being one of the most expert among them, having much business to do among the people.” Sounds like a very successful lawyer with a lot of clients and he must have

had a pretty nice income from the sound of it. I am sure he could easily afford to eat the very best food that the city of Ammoniah had to offer. But was he happy? Perhaps he thought so before he began to hear Amulek and Alma preach unto the people, but after hearing Amulek explain the resurrection and judgment he begin to tremble with fear. When Alma took over and became a second witness to things to which Amulek had testified, Zeezrom trembled even more, and 8 verses later in Alma chapter 12:8, Zeezrom begins to inquire of them diligently that he might know more concerning the kingdom of God. Fast forward to Chapter 15. Alma and Amulek have been miraculously freed from the prison where they were being held and have made their way to the land of Sidom where Zeezrom “lay sick with a burning fever caused by the great tribulations of his mind on account of his wickedness for he supposed that Alma and Amulek were no more; and he supposed that they had been slain because of his iniquity.”   Now when Zeezrom heard that Alma and Amulek were alive and in the land of Sidom, his heart took courage and he sent a message to them asking them to come to him. When Zeezrom saw them, he “besought them that they would heal him”. So Alma took him by the hand and said, O Lord our God, have mercy on this man, and heal him according to his faith which is in Christ.” And when Alma had said these words, Zeezrom leaped upon his feet and began to walk. Alma then baptized Zeezrom and “he began from that time forth to preach unto the people.” This sounds like a much happier man now that he had repented and been baptized. I have never seen food do that!

Maybe this would be a good time for a few happiness scriptures:

So what is the true foundation of all genuine happiness? It is in following the Saviors example. It is in partaking of the fruit of the tree of life, which is the atonement of Jesus Christ (this is what Zeezrom did). It is in knowing and keeping the commandments of God. It is in serving others to do things for them that they cannot do for themselves, it is being willing to suffer reproach for the Saviors name. It is in seeking to be worthy of the priesthood of God to bless the lives of others. These are the things that form the foundation of all genuine happiness.

The world continues to try and create substitutes for happiness:  Drugs, pornography, alcohol, self-promotion, fame, and yes even food. All of these things are false foundations. It is only in the gospel of Jesus Christ that foundation for genuine happiness can be found.