Episode 48.  December 31, 2016.   I want to apologize to my listeners for not getting a znukcast published earlier this week. We were back home in Texas for 12 days and with Christmas and all of the kids and grandkids in town, I just didn’t get it done. Hopefully late is better than never.  Today I want to talk about a couple of experiences that helped me to understand that all things testify of Christ.

I think I first realized for myself the truthfulness of the statement that all things testify of Christ while we were living in LaPlace, LA in 1987. The Norco Refinery where I was working had contracted Ed Foreman to come to the site and hold a series of seminars with the staff about improving our attitude towards life. His motto was “Life is Terrific”. He was mostly just a motivational speaker, but he had sufficient content to put some credence behind his enthusiastic marketing of the power of a positive attitude.  At my level we were offered a husband-wife Saturday morning seminar and so LaDawn and I attended and really enjoyed what we learned. I have always been a fairly enthusiastic person, so this really spoke to me. Part of what Ed promoted was to get up early each day and talk a walk, enjoying the beauty that the earth offers and repeating the affirmation, I’m Healthy, I’m Happy, I’m Terrific!

It was on one of these morning walks in the fall of 1987 that I noticed something that I had never noticed before. It had to do with the trees, the grass, the shrubs and the flowers. 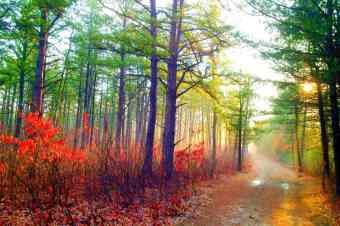 Everything that was green. Don’t get me wrong, I had obviously seen all of this before, but that morning I saw with new eyes. It started with the trees. As I gazed upon their magnificent grandeur and strength, I saw that every single aspect of that tree was in what I now call a “worship pose”. As if that tree were alive, it was stretching every tree limb, every branch, and yes every leaf heavenward in praise of its creator. It was an amazing realization. Immediately my eyes followed the tree trunks down to the ground where I then saw shrubs, bushes, flowers and even the grass in the very same worship pose. Everything God had created was gazing upward with outstretched arms giving glory and praise to the God of the Universe! For me it was an amazing realization how all of nature recognizes, obeys and worships the God of the universe and reminded me of the scripture found in Helaman 12: 7-8 “O how great is the nothingness of the children of men; yea, even they are less than the dust of the earth. For behold, the dust of the earth moveth hither and thither, to the dividing asunder, at the command of our great and everlasting God.”

A number of years later I was in York, Maine attending a series of seminars having to do with leadership, change management and dialog. The course was taught by Bill Isaacs and Peter Garrett and their company was called Dialogos. Bill was a contemporary and student of Peter Senge, author of the now famous book, the 5th Discipline. Much of what Bill and Peter taught was teaching practitioners how to become effective change agents through the use of Dialog as means of getting people to think together. The course was held over a year, and the entire group would come together every three months for 3-4 days at the amazingly beautiful Stage Neck Inn right on the Atlantic Ocean.

I think it was the third week we were together. It was early fall in 1999 and as part of our coursework we were to each take a quiet reflection walk. I had been thinking a lot about the whole dialog process about getting people thinking together in order to create lasting change. The more involved I became with the practice of Dialog it was clear to me that what was being taught were gospel principles in an effort to tap into the Light of Christ. It was an amazing realization to see people who had no concept of a personal God (I mean these were ultimate East Coast liberals) figure out how to apply principles that could tap into this power that helped them discern one another’s thoughts and come to the same conclusions about the way forwards. I was both ecstatic and confused at the same time. Ecstatic because this was my territory. Confused because I didn’t realize it was possible to tap into this power unknowingly or by using non-gospel themed approaches. But sure enough, that was what was happening. It also gave me an entirely new perspective on how much God loves all of his children. Truth is eternal and unchanging. Anyone can access the power of the Light of Christ, cultivate the influence of the Spirit of the Lord in their lives and even from time to time tap into the Holy Ghost.

Well, I was in the midst of a full-blown realization of these truths when we were asked to go on this reflection walk. I don’t exactly remember what it was I was supposed to be reflecting on, but I do know what I was thinking about.

As I walked, the memories of that morning back in 1987 came rushing back to me and I began to look around for evidences of God. There was a construction site nearby that had been fenced with a chain link fence. As I looked at that fence I suddenly realized that the materials to make that fence came from minerals in the earth….made by God. Inside the fence line was a big yellow backhoe. Again, I realized that the backhoe was made of steel,

which had been forged by man from minerals made by God. And in that moment, this phrase came to me: “O man, ye think ye are so wise, yet everything you have created comes from God.” The more I looked around the more I realized that everything around me, cars, equipment, buildings, roads – all of them came from the natural resources of the earth. God not only created the earth and all of its resources, but also inspired man through the Light of Christ to create valuable and necessary tools and building materials. As I looked around, every single thing I could see testified of a loving Heavenly Father and His only begotten son, Jesus Christ.

I later found another scripture that reinforces this. It is found in 2 Nephi 11:4. “Behold, my soul delighteth in proving unto my people the truth of the coming of Christ; for, for this end hath the law of Moses been given; and all things which have been given of God from the beginning of the world, unto man, are the typifying of him.”

We are so privileged to live in a world where we are surrounded by evidences of a loving Heavenly Father and His son and our Savior and Redeemer Jesus Christ. I hope you will have a look around and see it for yourself.