Episode 41. November 6, 2016 . As I mentioned in episode 40, we traveled to Siem Reap Cambodia last weekend and visited a number of Hindu and Buddhist Temples built between the 10th and 13th centuries. Today I want to share a bit of history, talk about my key takeaways from the visit and share 5 analogies that I have taken note of since our stay.

The Khmer or Angkor Empire was the predecessor state to modern Cambodia and was a powerful Hindu-Buddhist empire in Southeast Asia. During its existence between the 9th and the 15th Century it at times ruled over most of modern day Laos, Thailand and southern Vietnam. 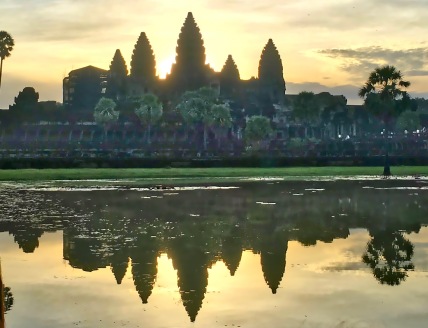 Cambodia.   Angkor was the site of the capital city during the empire’s glory days. During its peak in the 11th – 13th centuries, it was the largest pre-industrial urban center in the world. When formed in 802 AD, King Jayavarman II declared himself as a devaraja which means “god-king”. The ruins of Angkor are located near modern day Siem Reap and consist of over 1000 temples. The gemstone of these ruins is Angkor Wat, said to be the world’s largest single religious monument. The majestic monuments of Angkor bear testimony to the power, wealth, architectural technique, and culture of the Khmer Empire.

While there, we visited 7 major temple sites:

There are 6 key learning’s that I came away with from our visit.

Okay, so that is a very brief history and my key takeaways from the visit. I now want to share with you first a bit of context and then 5 gospel analogies that have occurred to me since visiting these ruins.

The vast majority of these temples were built mainly from sandstone, which was mined from a quarry 25 miles to the northeast. The entire city of Angkor used up far greater amounts of stone than all the Egyptian pyramids combined. Angkor Wat was made out of up to 10 million sandstone blocks with a maximum weight of 1.5 tons each. Sandstone was easy to carve, but tended to erode and decay in the hot humid climates. Laterite, a rock rich in iron and aluminum and much harder than sandstone, was often used for the outer wall and for hidden structural parts.  Some temples, such as Pre Rup were built with less sandstone and more clay bricks, especially on the towers. The decay of that temple, though spared from the jungle, has been accelerated simply because of the small size of the bricks. Fortunately its foundation is laterite, which has kept it standing. Nearly all of these temples were built on sandy foundations so moats were often built around the temples to serve as a protection in multiple ways. First it kept the sandy foundations moist, thus helping to keep the walls from leaning and eventually falling. Second, they also provided some protection from the encroachment of the jungle. When a moat dried up, the decay of the temple accelerated.  In temples like Ta Prohm and Beng Melea, the roots from jungle trees 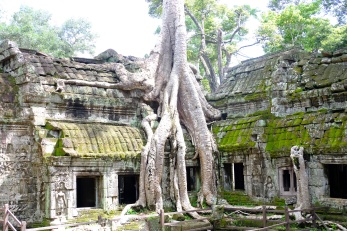 sought out crevices in the sandstone blocks where they could find water in the porous rock. These searching roots could turn a small crack into a devastating crevice that would either spell the demise of the entire structure or become a support to keep it standing. The latter was an exception. During the construction of these temples the concept of using keystones to build arches was either unknown, not understood, or not believed. Gabled roofs of hallways were built with large stones leaning against each other to form an arch at the top. If one of these stones slipped, then the roof of the entire archway would fall like dominoes.

Lesson One: The amount of effort we put into our testimony will determine its staying power. Large sandstone blocks are like the blocks of time we dedicate to scripture study, prayer, temple worship and serving others. Dedicating large blocks of time to these endeavors is hard, but the result is a testimony that stands up to mocking, ridicule and persecution. Small blocks of time where we are more interested in “checking the box”, are like clay bricks. We can build a structure with them, but they may not stand the tests of time.

Second, while laterite was not as glamorous as using sandstone for the exterior of the temples since it couldn’t be easily carved, the kings and architects constantly used sandstone. The beautiful sandstone finishes with their fine engravings were beautiful in their prime, but with time they decayed into ruins.

Lesson Two: Too many are tempted to dress immodestly, because that is the style of the day and will make them appear “beautiful” or “sexy” as defined by the world. But immodesty often leads to immorality. Being modest throughout our lives may feel like building temples with laterite stone, but in the end, our own temples, will remain standing as explained in 1 Corinthians 3:16-17.

Third, the bigger and more well defined the moat, with a constant source of water, the greater the protection from crumbling foundations and encroaching jungle forestation.

Lesson Three: Temple moats are like latter-day temple covenants. They keep us safe. They keep our foundation sure and firm. They block encroaching evil by pointing us in the right direction and allowing us to claim our blessings. Just as the water became a saving ingredient for the sandy foundations, so also does the living water offered us by Jesus Christ and his gospel become the saving ingredient in our lives.

Fourth, once the people left the temples, there was no one there to pull the small seedlings that would spring up thru the small cracks in the sandstone blocks. There was no one to clear the weeds or choking vines. The sheer number of people that would walk the temple grounds was an impediment to new forest growth.

Lesson Four: We must constantly pay attention to the encroaching evils around us. Pornography has become an absolute plague throughout the world. Its ever-growing roots finding every crack in the soul of man and often become so large that removing them is incredibly difficult. There are other evils as well such as addictions related to video gaming, gambling, drugs, alcohol, tobacco that become crushing, strangling, choking and spiritually life threatening vines that will squeeze all and any light completely out of us. We must take care to properly maintain our spiritual lives so these roots cannot take hold. 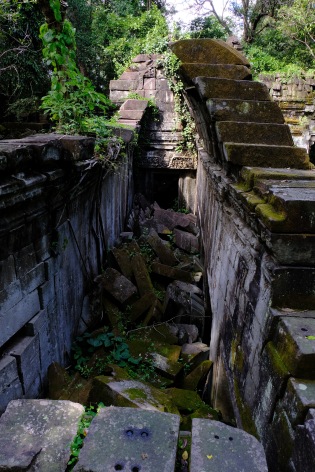 Fifth, without a keystone to support the arched ceilings of passageways and hallways, the roofs were subject to slippage and cave-ins.   While the use of keystones in arches dates to nearly 1800 years B.C., the concept had not made it to the Khmer architects of their day.

One thought on “Lessons from Cambodia”