Perhaps you, like me, have wondered why it was that Laman and Lemuel, two of the sons of Lehi and Sariah in the Book of Mormon were so rebellious. I mean, Lehi was a prophet, right? How could it be that these two eldest boys constantly murmured, complained and were so filled with pride and resentment. Today I want to take a peek into the life of Lehi’s family and then our own….and perhaps offer a few suggestions that I hope will be helpful to all of us.

Most Book of Mormon scholars agree that Lehi was some sort of trader of goods. Some conclude he may have been a merchant trader of precious metals, others suggest he may have traded in incense. In any case, we know that he was quite wealthy and from time to time traveled away from Jerusalem, as such was the case when he received his vision to depart with his family into the wilderness. We also know that Laman and Lemuel were given Arab names, potentially because Lehi worked closely for many years with the Arabs in the trade business. Hugh Nibley suggests that the character and behavior of Laman and Lemuel even conform to the normal Arab pattern. He says: “How true to the Bedouin way are their long, bitter, brooding and dangerous outbreaks! How perfectly they resemble the Arabs of Lawrence, Doughty, Burton, and the rest in their sudden and complete changes of heart after their father has lectured them, fiery anger yielding for the moment to a great impulse to humility and an overwhelming repentance, only to be followed by renewed resentment and more unhappy wrangling!” [end quote]. This definitely sounds like Laman and Lemuel! Perhaps Lehi as he grew older could see this influence on his older boys and decided to raise Nephi and Sam differently. Maybe he simply stopped traveling as often. We don’t really know. His record doesn’t tell us much here but it is clear that Sam and Nephi were different.

Okay, let’s get to the good stuff.   Let’s talk about Sariah and Lehi.   When Lehi sent Laman, Lemuel, Sam and Nephi back for the plates that Laban had in his possession, we learn in the 5th chapter of first Nephi that Sariah complained against Lehi telling him he was a visionary man. Here we have a glimpse of Sariah, who had been a faithful wife and mother. She had helped to pack up her family and head into the wilderness and now when she feared for her sons’ lives, she turned to complaining rather than to faith.

Let’s fast forward now to Nephi’s broken bow incident. After traveling in the wilderness for many days, the family stopped to rest and obtain food. The men went hunting but came back empty handed because Laman and Lemuel’s bows had lost their spring and Nephi’s bow had broken. They were tired and hungry and no prospect for a meal. In chapter 16 verse 20 we read: And it came to pass that Laman and Lemuel and the sons of Ishmael did begin to murmur exceedingly, because of their sufferings and afflictions in the wilderness; and also my father began to murmur against the Lord his God.

So here are two examples where faithful and obedient Lehi and Sariah lost their faith footing in these two incidents and both of them ended up murmuring. Is it any wonder then that Laman and Lemuel felt justified in murmuring?

Let me tell you another story. It is a story about Bob and Sophie. Sophie lived in Thomas, Idaho, a small area just outside of Blackfoot. Bob was working as a farm hand. He was from Bates, Idaho, another small community about 75 miles north of Thomas. Well in the course of a few months, Bob met Sophie and they fell in love and decided to get married. 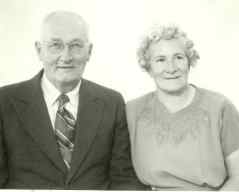 Sophie was a devout Mormon and refused to marry outside of the temple. Bob was not as committed. He had a chewing tobacco habit, wasn’t paying tithing, used a few choice words regularly, all of which made him unworthy to enter the temple. But Sophie insisted she would not marry him in any other place, so Bob cleaned up his act, got himself worthy of a temple recommend and on the 23rd of August, 1916, Bob and Sophie were sealed in the Salt Lake Temple. They moved to Bates, near Victor, to start their lives together. A little over a year later, their first child was born, a healthy young boy and they named him Leonard. It wasn’t long before Bob stopped going to church, picked up his chewing tobacco habit again and increased the frequency of his colorful language. To my knowledge he never again returned to the temple after his sealing in 1916.   Throughout his life Bob rarely went to church. Within 15 years after they married, the burden of farm life and an inactive husband overwhelmed Sophie and she too became inactive. Bob and Sophie went on to have 4 more children for a total of 2 boys and 3 girls. All but the youngest son spent the biggest portion of their lives as inactive members of the church.

The consequences of Bob’s decision to not live the gospel has echoed now through three generations. I know this, because their first born son was my father. A man who by the time he was 16 was already following the example of his father. A man who struggled his entire life with tobacco addiction and alcohol abuse. A man’s whose life was good, but could have been so much better had he been born to a man who honored his priesthood. Don’t get me wrong, I loved my grandfather and my grandmother. They were wonderful people and I knew they loved me. But they missed out on so many blessings for themselves and their families. You see, what we do does matter not just to ourselves, but to our posterity. I am one of the fortunate ones who was able to find the gospel and bring those blessings into my life. Only two or three of my cousins have been as fortunate. The rest have struggled with addictions, divorce, financial despair and unhappiness.

So why do I tell you this story? Because I learned something while serving as a bishop that I had not known earlier about the power of example. I was surprised to find that when adults would come and and talk to me about problems they were having, I could often see the exact same problems manifested in their children. Sometimes these problems would be hidden from the child, in other words, it wasn’t obvious that the issue even existed in the parent, but with time, almost without exception (which was most troublesome to me), the same problem would creep into the the maturing child’s life. If a mom had a faith crises, her teenage daughters struggled with their own faith. If a man struggled with pornography or alcohol, their boys would experiment with the same things. If a man or a woman was unfaithful in their marriage, their children would often be promiscuous.

Let’s go back to Lehi and Sariah. We can read the words on the pages that they both struggled with murmuring. What if they had not murmured, but instead just kept in inside. Would it have made a difference to their children? I am suggesting that it would not have mattered. Children are very preceptive about what their parents do and do not do and what they believe and do not believe. Often a teenager (this is the age where this manifests itself more often than any other) who can sense a problem in either one or both of their parents’ lives will use that as an excuse to do the exact same thing. I compare it to cracks in our armor. If we have them, then our children will find them and will drive a wedge into that crack. What may have been a small crack in our armor may will become a gaping hole in theirs.

To the parents, I sound a warning that we must be filled with pure intent in all that we do when it comes to our commitments, our honesty, our relationships and most importantly our faith. If we do not fulfill our church assignments or do so half-heartedly, our children will likely follow that example. If we take shortcuts, then our kids will take even shorter ones. If we neglect the scriptures and prayer, they will find it difficult to read and pray for themselves.

How grateful I am for the atonement of Jesus Christ that can seal the cracks in our armor so that no wedge can be driven in to force them open. The atonement can offer us hope to purge past mistakes, forgive errors in judgment and allow us to erase sin from our lives. It will help us to chart a new course, perhaps one different from our parents if their own struggles feel like a burden to us. We do not have to live our parents’ lives. Yes, we should honor them regardless of their choices, but we must choose our own course. To the parents with wayward children, we should look into our childrens’ lives and see if there is anything there that we might purge from our own life. They too will make their own choices, and a child’s waywardness is not always the result of a parent’s example…but sometimes it is. We must be humble enough to examine our own lives and come to know for ourselves if we were contributors.

We will all make mistakes. Children learn from parents who are humble and penitent. They learn that they too can be forgiven. It is only when we undertake to cover our sins, or to gratify our pride or our vain ambition or to exercise control or dominion or compulsion upon the souls of the children of men in any degree of unrighteousness that the heavens withdraw themselves and the Spirit of Lord is grieved. (see D&C 121:37)

The best news of all is that we each have our own exemplar in Jesus Christ the Son of God. We can always look to him and ask ourselves, “What would Jesus do?”.